A Failure is Not the End 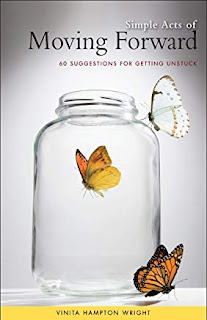 It has been some time since I've picked up my copy of SIMPLE ACTS OF MOVING FORWARD, but I read several chapters last night and was reminded why I enjoyed it so much previously.  I highly recommend this book by Vinita Hampton Wright regardless of which part of your life you may need some suggestions for getting unstuck.

In the section entitled Acts of Daring, Wright quotes Gregg Levoy in CALLINGS as saying,

"I was once told that if I am not failing regularly, I'm living so far below my potential that I'm failing anyway."

This really spoke to me. I suppose it seems a bit harsh to consider the possibility that one is failing if not "failing," but I think the idea involves taking some risks in life. If one doesn't try, and inevitably fail some, one cannot achieve his/her potential as it is only in putting oneself out there and being vulnerable, and sometimes failing miserably, that one can reach greatness.

Much in our lives, both personally and professionally, is learned the hard way with great effort and a whole lot of blood, sweat and tears, so why should writing be any different?

Whether in the comments received from critique partners or the rejections received from agents or publishers (even those nice champagne rejections), authors must have a thick skin and press on.  Perhaps we need to adjust how we perceive those "failures" and consider them fuel for the proverbial fire within rather than a reason to give up on something. I am a firm believer in persistence pays and perseverance is as, if not more, important than anything else. It has certainly been the case for me anyway in many aspects of my life.

So, my friends, if at first you don't succeed, continue to work hard and press on regardless of the struggles encountered. I will be doing the same. For any road worth traveling has a few bumps along the way.

Today, March 2, is widely celebrated as Read Across America Day. This day serves as motivation and awareness in calling every child to celebrate reading in honor of the birthday of Dr. Seuss.  Who better to celebrate than Dr. Seuss who made reading and enjoying books so much fun for kids, and who continues to enchant and entertain children and adults today.

Motivating children to read, which, in turn, improves student achievement and performance in school, is so very important.  As a children's author, my goal is to write books that make kids (and the parents reading to their kids) want to read them time and time again.  I want to instill a love of reading and books in kids and make them want to pick up a book and read.

Losing oneself in the pages of a book and the life created therein is what made me want to be an author in the first place.  To do this for children is the greatest honor and privilege, and I salute Dr. Seuss for helping the world see the fun words and stories can be for children.

So, today, grab your favorite book, Dr. Seuss or otherwise, and settle in to read. I know I will be doing the same.

Should you feel so inclined, please share your favorite Dr. Seuss book below.  It is hard to beat THE CAT IN THE HAT, but OH! THE PLACES YOU'LL GO is one of my favs! How about you?